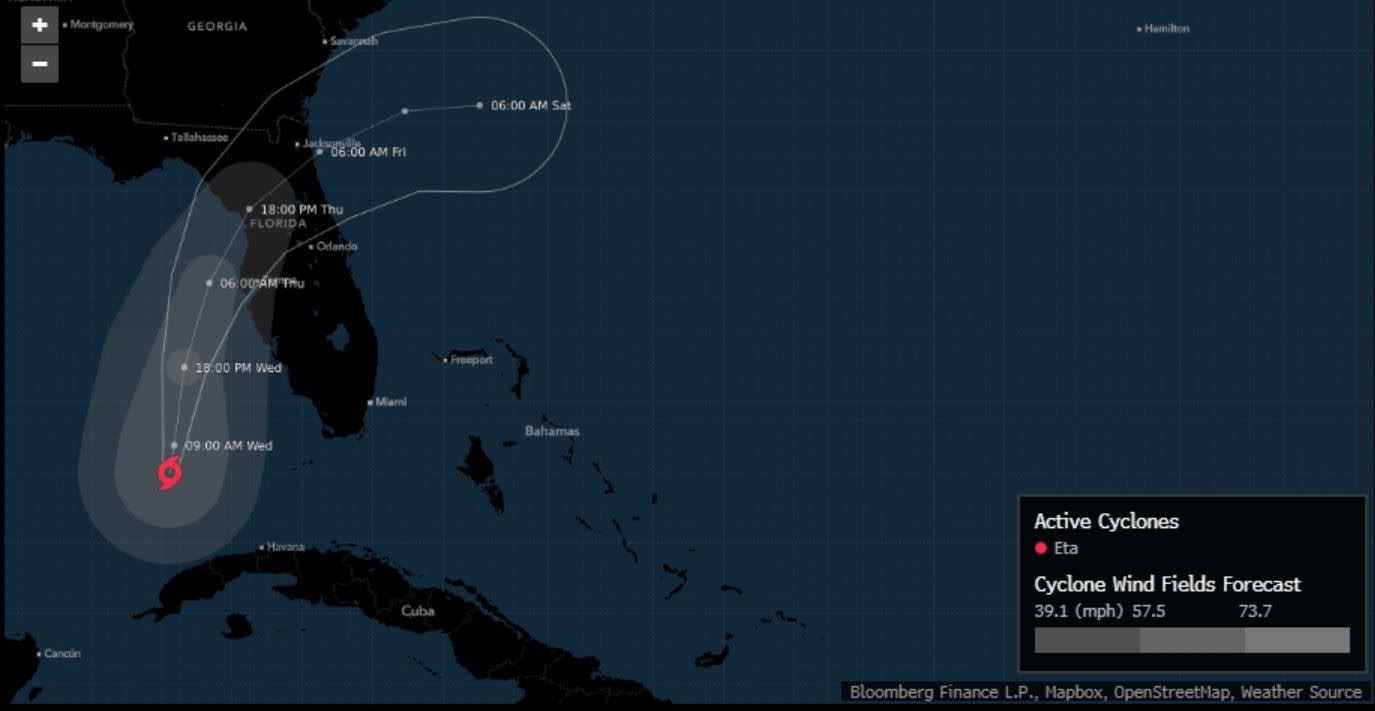 (Bloomberg) — After days of meandering in the Gulf of Mexico, Hurricane Eta is zeroing in on Florida’s west coast, where it could make landfall Thursday.A hurricane watch has been posted along the shore from Anna Maria Island, south of Tampa, to Yankeetown. Eta could push ocean levels as high as 5 feet (1.5 meters) above normal in Tampa Bay and Charlotte Harbor, the National Hurricane Center said. Eta’s power has probably peaked, and it’s forecast to weaken before landfall.“There is already a large area of rain that is blowing over south Florida and things are going to deteriorate from south to north across the Florida peninsula today,” said Dan Kottlowski, a meteorologist with commercial forecaster AccuWeather.This would be Eta’s second strike after it hit the Florida Keys late Sunday as the record 12th named storm to target the U.S. in 2020. It had already left a path of destruction through Central America and the Caribbean. The storm killed more than 100 people across Central America last week, according to the Associated Press.Larger weather patterns over the U.S. caused Eta to meander across the southern Gulf of Mexico for days and also confounded forecasters. The track had shifted to the west Tuesday, making it appear that it would hit near Pensacola, Florida, Saturday before sliding back overnight. The eastward shift removes any threat to offshore oil and natural gas production.Eta should make landfall near Yankeetown, about 90 miles (145 kilometers) north of Tampa, sometime between Thursday morning and early afternoon, said Kottlowski. Then it will cross northern Florida, bringing rain and wind to Jacksonville before popping back into the Atlantic.“And then hopefully it will fall apart and we will wave it goodbye,” he said.Eta could cause upwards of $600 million in losses and damages, according to Chuck Watson, a disaster modeler at Enki Research. At the high end costs could rise to $1 billion.The storm has already brought flooding rains and storm surge across southern Florida for days. Neighborhoods flooded across several parts of South Florida, including Miami’s Brickell Avenue financial district, where several banks and investment firms have their offices.Florida Governor Ron DeSantis has declared an emergency in advance of Eta.There was some slight damage to orange crops. Florida is the world’s second-largest producer of orange juice behind Brazil.Across the Atlantic, a record 29 storms have formed this year, breaking the previous mark set in 2005 when Hurricane Katrina devastated New Orleans. Theta is currently in the central Atlantic far from land, while a third storm could develop in the Caribbean in the next five days.So many storms have formed this year that the hurricane center used up all the names on the official list by mid-September and has had to use Greek letters to designate subsequent systems.(Updates forecast in second paragraph.)For more articles like this, please visit us at bloomberg.comSubscribe now to stay ahead with the most trusted business news source.©2020 Bloomberg L.P.